How to Distinguish iPhone Models and iPad Models

Generally, it is easier to identify a specific iPhone, or iPad than it is to identify a Mac although, many iDevices look quite similar to one another and some recent models, in particular, can be a challenge to differentiate visually. The most important is that if you want to find the perfect solution to recover lost data from your iPhone and Pad, you should identify the exact model of your device. Consequently, this page provides methods that can be used to distinguish a particular iPhone or iPad models.

Part 1: How to distinguish iPhone 4S from iPhone 4

1. The Most Obvious Difference: Siri

Siri is an intelligent assistant that enables you to speak to send messages, make calls, set reminders, and more. It only appears on iPhone 4S and iPhone 5, if you have Siri, you have an iPhone 4S or iPhone 5. Check out if you have Siri on your iPhone first.

Besides Siri, there are other differences between iPhone 4S and iPhone 4. As shown in the image below, you'll see the positions of black bars and the mute button are different.

Apple has upgraded most hardware in iPhone 4S. Check the table below for the detail specifications of iPhone 4S and iPhone 4.

Part 2: How to distinguish iPhone (GSM) from iPhone (CDMA)

Part 3: How to distinguish between all iPad models

1. Siri is only available on iPad with Retina display

2. The new connector for iPad with Retina display

Since iPad mini and iPad with Retina display(iPad 4), Apple introduces a smaller connector and thus smaller port on iPad. If you're using a Lightning connector, your iPad is iPad 4, instead of iPad 2 or iPad 3.

B. Differences between the new iPad (iPad 3) and iPad 2

In the iPad family, iPad 2 and the new iPad is very hard to distinguish. Only very little changes are made between these two iPad models. Never mind, you can still find methods to distinguish them from each other.

A huge improvement was made on the third generation of iPad. The lens is bigger and it has a wider angle and aperture. If you have a vernier caliper, use it to measure the camera diameter of iPad 2 (5.5mm) and the new iPad (6.9mm). If you have 2 different iPads on hand, judge it with your eyes. Voice Dictation, Siri's little sister, is an application to translate what you say into words. To distinguish the new iPad from iPad 2, simply check whether the Voice Dictation button is on the keyboard or not. If it's there, your iPad is the new iPad (iPad 3). 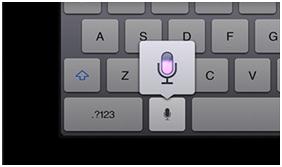 It is hoped that by having as many possible ways to identify iPhones and iPads available, you will have enough information to pinpoint exactly which device you have or intend to purchase.

In wrong cases, such as iOS devices crash, accidentally delete information from your iPhone or iPad by touching the screen the wrong way etc., your data is gone... Don't despair. Brorsoft iRefone for Mac is an easy-to-use utility that enables you to quickly recover data stored on your iDevices. It can help you recover upto 14 types of lost files including Contacts, Messages, Call history, Calendar, Notes, Reminder, Safari bookmark, WhatsApp, etc from your iDevice. And it offers you 3 solutions to recover lost data from iPhone, iPad and iPod touch: recover lost files directly from your device connected; recover data from iTunes backup files; download and recover data from iCloud backup files. Its equivalent Windows version is Brorsoft iRefone.